On the eve of the referendum, Greek voters are undecided how to vote. If one believes the polls, it's essentially a dead heat with 43% 'no', 42.5% 'yes' and the rest undecided.

Of course, the accuracy of the polls is seriously in question.

“What is certain is that come Monday, Greece won’t be facing just massive economic problems; it will be a deeply divided country,” said Nikos Marantzidis, a pollster and professor of political science at the University of Macedonia in northern Greece. “If the economic situation deteriorates further, which it probably will, the divide will only run deeper.” 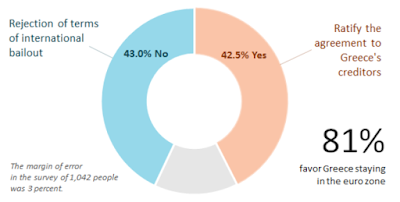 RT has an interesting video of rallies with each side claiming 20,000 participants.

Link if video does not play: Drone View of Greek Rallies

On Way Home From Iceland

Liz and I left Iceland today after a glorious 17 day trip in which we got little sleep. Sunset and sunrise were 1.5 to 3 hours apart and we were typically up for both.

I blogged in the afternoons, and we stayed in 14 different cities on our route.

With travel, blogging and photography, on several days I got as little as 2-3 hours sleep, and seldom more than 5 hours.

I received many reader question regarding my post BitGold Now Available in US! Why BitGold?

I expect to have answers to all of them early next week.