File this story in the category of "be careful what you wish for, you just may get it".

I am talking about Brazil, more specifically, Brazil's currency, the Real. Let's also investigate comments made by former finance minister Guido Mantega about the Real.

BRL vs. US Dollar 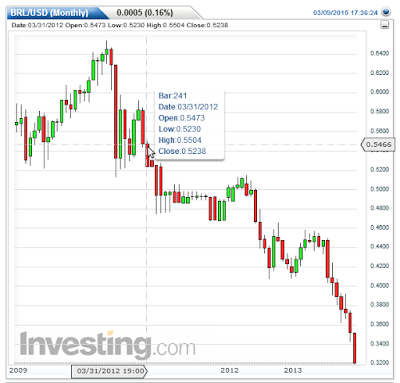 I highlighted the March 2012 candle because that's when Brazil Declared New Currency War on US and Europe.

“When the real appreciates, it reduces our competitiveness. Exports are more expensive, imports are cheaper and it creates unfair competition for businesses in Brazil,” said Guido Mantega, the finance minister who was the first to use the controversial term "currency war" in 2010.

My comment at the time was "Mathematically speaking, the desire for every country to be net exporters is impossible. Massive trade wars are on the horizon as a result."

In July of 2011, in Credit Crisis in Brazil: Consumer Loan Rates Hit 47%, Defaults Soar, Debt Service Tops 50% of Disposable Income I posted an email from Otavio. He is from Brazil.

Otavio here, a Brazilian follower of your blog. Today I want to express my satisfaction as I read you latest post entitled Preposterous Statements - Jim Rogers: "No Food at Any Price"; Barton Biggs: " U.S. Needs Massive Infrastructure Program".

When I hear statements like these, it feels like the move up in commodity prices might be near the end. I cannot stress more the fact that high prices fueled by zero interest rates in developed and many emerging markets (for many years now) are a fruit of rampant speculation.

We have our own credit bubble here, which in my opinion has a good chance of busting sooner rather than later ....

For the record, I will say that in my opinion, Brazilian real estate, many local stocks, and our currency (the Real), are extremely overvalued as well.

At that time Brazil's Finance Minister, Guido Mantega announced "The government will continue to take measures to contain the over-valuation of the exchange rate."

I commented "I am inclined to agree with Otavio who says the Real is extremely overvalued".

Today, I declare victory on behalf of Mantega!

Mantega "won" his currency war. The Real was worth $0.65 in June of 2011. It is now worth about $0.32. That's a decline of slightly over 50%, and a clear "victory" over US forces allegedly conspiring to drive the Real higher.

Surely this is good for the Brazil stock market. Right?

In search of more victories let's take a look. 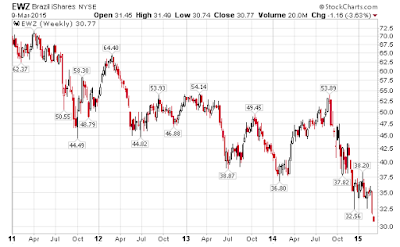 The above chart does include currency depreciation. Straight up, the chart looks better. 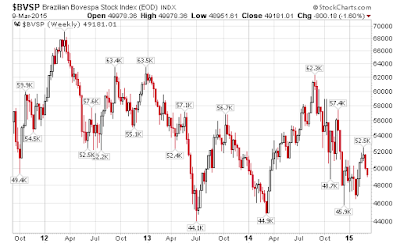 What about interest rates? 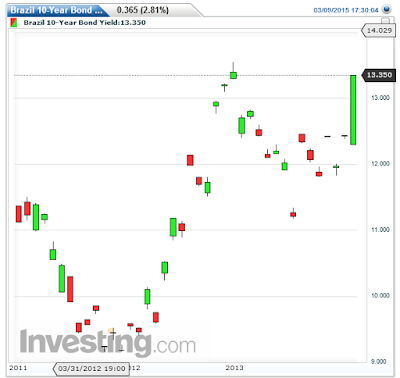 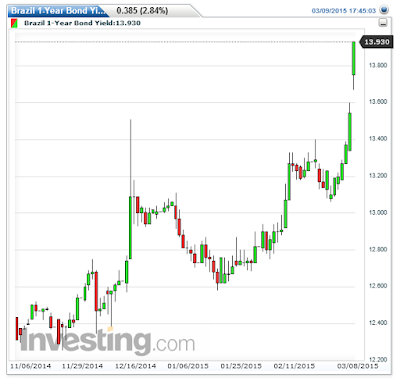 To shore up the currency, Brazil has now had to hike rates.

This is what's known as "too much success".

It's also too bad that Mantega is no longer around to receive my celebratory victory call.

Brazilian president Dilma Rousseff Shuffled Mantega out the Door in November of 2014. Former treasury head Joaquim Levy took over as finance minister in one of many shifts announced by Rousseff.

Please note that it's hard to stop success once it gets rolling.

Moreover, recent success comes in spite of three straight rates hikes by the central bank, the last one was a 50 basis point hike on March 4th to 12.75%.

Recession is a given.

On the political side, Dilma Rousseff campaigned with an anti-austerity message last year. She barely won reelection and her first move was to launch a series of budget cuts.

Her speech last Sunday explaining the campaign lie was not well received: Brazilians Voice their Anger as Currency and Economy Continue their Collapse.


President Dilma Rousseff went on national television on Sunday to ask for patience and understanding and was greeted by spontaneous protests in the country’s major cities, Brazilian media reported, describing citizens shouting “Dilma out” from their windows, banging pans, turning lights on and off and sounding car horns.

One person suggested the Petrobras scandal explains the currency decline. That's not quite accurate, although it certainly adds to the misery.

One look at the currency charts of Australia, Canada, and Russia will also show the commodity exporter tie-in. Clearly Russia has other problems as well including sanctions and Ukraine.

Nonetheless, the scandal is major news. 54 politicians are accused of taking bribes. Those politicians include a former president and the speakers of both chambers of Congress.


President Dilma Rousseff has been completely cleared of any involvement in the scheme. She chaired the board of Petrobras for seven years when much of the corruption is believed to have taken place.

Analysts say because Petrobras has not yet been able to say exactly how much money it has lost to corruption, no-one knows for sure how much its assets are really worth.

In December, prosecutors charged executives from six of the country's largest construction firms for allegedly channelling kickbacks into a Petrobras scheme to pay politicians.

In Brazilian law, politicians and cabinet officials are tried by the Supreme Court.


Petrobras, the country’s largest company with a virtual monopoly over oil exploration in Brazil, is reeling from allegations that senior Petrobras executives accepted bribes from many of Brazil’s biggest construction companies in exchange for contracts.

Much of the money was allegedly passed on to politicians, mostly in the ruling coalition.

The scandal is complicating an already difficult political and economic scenario for Ms Rousseff, who won elections last October by the narrowest margin in recent history. The PT’s main coalition partner, the PMDB, is now the largest party in congress and is trying to force Ms Rousseff to share more power.

At the same time, Ms Rousseff’s new finance minister, Joaquim Levy, is trying to set Brazil’s public finances back on track to avoid a sovereign credit rating downgrade after years of fiscal largesse.

Tension has focused on her appointment of Mr Levy, a University of Chicago-trained orthodox economist. His fiscal austerity programme, which includes trimming benefits and raising taxes and interest rates, is straining relations with more leftist elements in the party.